When I was thoroughly enjoying myself at AwesomeCon last week, every so often I would be boggled that 1) I was actually at a convention with both Michael AND Tom in attendance and 2) the main topic of conversation among SV fans in the line-ups was Allison M's involvement in that creepy cult. As one fanboy put it: "CHLOE BRANDS WOMEN?"

I can remember the cult being discussed as early as 2006, in relation to both KK and AM. The concern then was that the cult leader would fleece the girls finances or damage their careers but obviously things got so much worse. From the sounds of it, AM fell in love with the cult leader and has done terrible things to keep his love. While KK left years ago, she's unfortunately still being dragged into news reports about it, probably because she's more famous than AM and makes a better story.

I've met AM twice, at Cons in 2013 & 2014. She was friendly and nice, but I was well aware of the cult by that point, although not the grim extent of her activities, and that did colour my perception of her somewhat. In her solo panels, she would speak of a "mentor" and most of the crowd seemed to assume she meant an acting mentor, but of course it was the cult leader. While answering fan questions, she circled back to her "mentor" a number of times, as though unable to stop talking about him. When I went up for an autograph, she asked me if I was watching "Beauty and the Beast." I wonder now, in retrospect, if B&TB was in her mind because she was missing Kristin. Their friendship had ended the year before, when KK left the cult.

It is an awful, sad story. I fear jail is what AM deserves and may be the only way to detach her from the cult. It was a relief Tom & Michael weren't asked about it during their con panels, although it did apparently come up during autographs:

Now, onto happier things, like these two being ADORABLE! 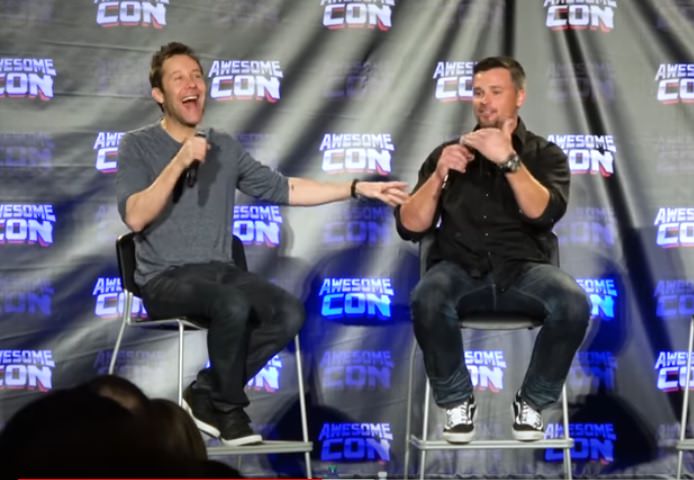